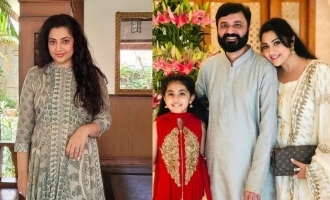 Veteran actress Meena’s husband Vidyasagar died on the night of June 28 at the age of 48 after battling lung problems for the past few months. His lungs are said to have been damaged due to his contact with air infected with pigeon droppings which some people cannot tolerate and develop allergies which turn into a serious infection.

Meena and Vidyasagar got married on July 12, 2009 and they have a ten-year-old daughter, Nainika, who is also an actress who starred alongside Thalapathy Vijay in Atlee’s ‘Theri’. The mother and daughter are in mourning after Vidyasagar’s body was cremated on June 29.

Meena has shared on numerous occasions that she and her husband had a very loving domestic life and that he was especially supportive as she continued her career in television and film after marriage. During a reality show she participated in as a judge, she also revealed that she originally rejected Vidyasagar when the alliance appeared.

According to the talented actress, when her family was looking for a suitable groom, the horoscope that matched her was that of Vidyasagar. When she met him and talked to him, she was not very impressed due to their different professions and opinions and after a few days she let him know too. Vidyasagar graciously accepted her decision and wishes her all the best.

However, it was one of Meena’s aunts who strictly told her that she was missing a good person and she then agreed to marry him and never looked back. Meena’s film industry friends in their tributes attested that she couldn’t have had a better person than him and the same for her daughter Nainika as well. They swear the duo will miss his love and support for the rest of their lives.