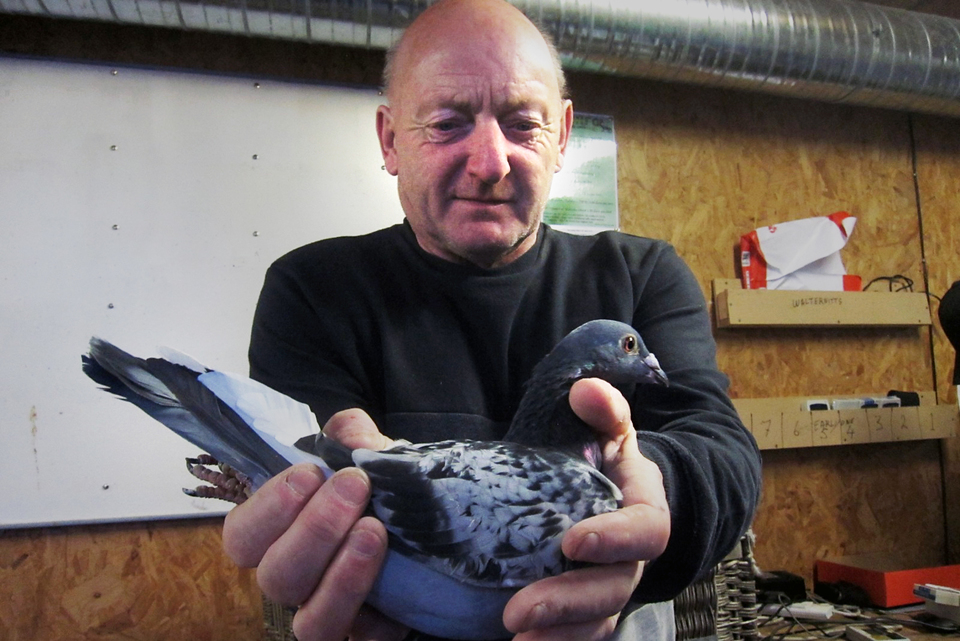 A Pigeon-Racing Club prepares for the start of the season

Much of the talk at the East Wall Pigeon Club House concerns a pigeon sold a few weeks earlier for 1.25 million Euros.

“If I knew I was going to heaven, I would pay a million two five,” says John Thompson, leaning on a chair facing the clubhouse door, a flat cap on his head.

To his left, two men are tagging pigeons.

He is incredulous at the price. “The best pigeon you ever got is from a neighbor or a friend. All that money…” he says. “It’s supposed to be a poor man’s sport.”

It’s Friday evening and the members of the East Wall Pigeon Club are bringing their pigeons to score for the first race of the season – a 70 mile flight from Thurles, where the pigeons are released, to their individual hutches in Dublin.

During the winter months, club members watched their roosters and hens raise their young.

They trained the young birds to return to the loft with whistles and food, stretching their flights over ever longer distances as they grew.

“Aren’t you running? shouts a man.

“No, they said it was too cold, Johnny!” says Sam Murphy, another member of the club, who wants to give his pigeons another week of training before letting them compete.

A few vans and cars park in front of the clubhouse. Some come out of the aluminum and wooden boxes of the boots. Half a dozen boxes are stacked outside the clubhouse. Each contains a cacophony of cooing. Some have three or four pigeons inside. Others have twenty.

The noise terrifies a young boy in a pram, who adds to the din with a groan.

More money in sports means some are quitting the game, Murphy says.

“It’s all gotten ridiculously expensive,” Murphy says, listing the expenses that now come into play. Vets, feed, the price of the birds.

And then, he said, all hobbies have been there, haven’t they?

On her head is a black fedora. It’s what he uses to communicate with his pigeons – to let them know what to do and when.

“Once they see the hat, they’re out,” Murphy explains. One Saturday morning, he wasn’t wearing it. The pigeons didn’t land in the hatch because they didn’t recognize it, he said.

There are only 12 members in the club now. Last year there were 24.

The pigeon club has been here at East Wall since the early 1970s.

But its origins go back even further – to 1955, when some locals decided the village needed a club of its own.

Pigeon racing is a working-class sport, says Joe Mooney, a member of the East Wall Historical Society. Many in the city’s working-class communities would have had dovecotes.

Two years ago the company documented the story of the East Wall Pigeon Club, showing the club’s metamorphosis from idea to reality – and its journey from its first clubhouse on St Mary’s Road in the back from the former boys’ school, to its current location. next to the Seán O’Casey Community Center.

The club is in a long rectangular room. A silver extraction system runs along the roof. The exhaust fan helps remove dust from pigeon feathers, preventing people from getting sick from pigeon lung.

“These are coming out tonight in Coolock,” Murphy said, pointing to the bird boxes. “I would say there would be around 10,000 pigeons.”

It’s not the greatest leads to running. For the young pigeon races in July, Murphy says, he expects another 5,000 pigeons to compete.

Through the club gate there is a wall of trophies, shields, plaques and ribbons left – accolades accumulated over the years from competitions in Ireland and abroad.

“They’re all in my name,” Thompson laughs. He points to a nondescript kitsch figure of a man on the wall near the trophies.

“It’s Walter Mitty,” Thompson said. “We called him Walter Mitty because every day of the race when you go down you hear more bloody stories. He didn’t want to come in, he was sitting on the roof, a helicopter flew by, a UFO hit him.

On the right, crates of birds wait to be labeled. This shows that they are eligible for the next day’s race.

At a table to the right, a few guys are busy tagging, attaching the electronic beacon that will beep once the pigeon lands in the hutch.

The tagged birds are then placed in boxes ready to be sent to Coolock – and then back to Thurles in Tipperary, where they will start the race.

“You get jealous people in the club, you do. Now I’ve won two big races and they haven’t spoken to me for two fucking years. Two years,” says Thompson.

The others in the room laugh.

“It’s a great hobby,” says Thompson. “And you must have a bit of a joke. Some people can’t take it. Me, I’m crying.

Before electronic tracking, there were more tears and fierce arguments about which pigeon landed in their hutch first, Murphy says.

“There were rubbers on their feet and you would pull the rubber off and put it in a thimble,” Murphy explains.

“Then you would put it in a clock and clap it and it would give you the exact time,” he says.

But that could be a problem. Sometimes it can take a fancier a few minutes to catch the pigeon and tear off the rubber. And those few minutes could be the difference between winning a race and losing.

Electronic tracking is fairer. It times the moment when the pigeon enters the hatch.

“It’s like when you’re in the Dunnes Stores and you get messages,” shouts another club member from across the room.

Still, pigeons can be pigeons.

Once Murphy’s pigeon came back to his garden and hung around, sat on the hatch rather than come in.

It cost him the race, he says, and the prize money.

“Oh Jaysus,” he said, recoiling at the memory.

It takes time to breed racing pigeons. They must be fed and watered daily. The lofts must be cleaned, the pigeons trained. It’s expensive too.

There is also the question of space. You can’t have a loft too close to a building anymore, says Murphy. Urban planning regulations do not allow this.

It’s linked to the decline of the sport, he says.

But he sees the main problem as disinterest. “Young people are no longer of interest,” says Murphy, who was 10 when he started breeding pigeons.

“They’d rather be in there,” he said, tapping buttons with his hands, as if playing an invisible computer game.

Still, there is something therapeutic about breeding and racing pigeons, he says.

Something about the fact that just getting out in the hatch and feeding the birds can be great for clearing your head, he says.

Then there are the hours of anticipation once a race is underway.

“The beauty of this game,” Murphy says, “is sitting in the yard and waiting.”

In the fascinating world of pigeon racing in China

The deadly odds of pigeon racing in the Philippines