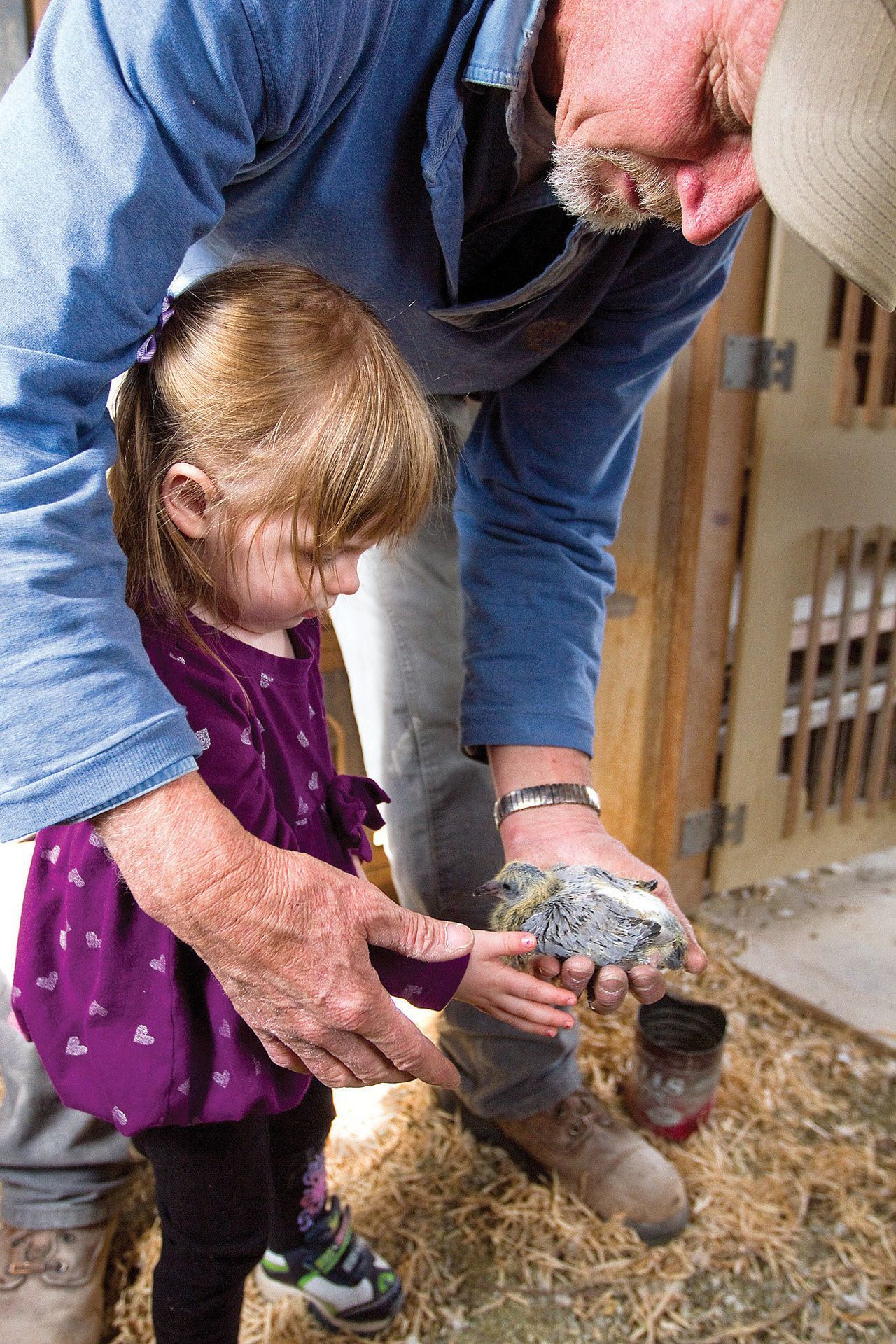 Reiley Wooten / Associated pressJeff Holberg helps his granddaughter, Mallory Casteel, 2, hold a baby pigeon, called a squeeker, in Moorcroft, Wyo., On April 20. Holberg has been breeding carrier pigeons since he was a child and as an adult took up racing. At one point he looked after over 100 homing pigeons at his Moorcroft home, but he now keeps a flock of around 25 birds.

Imagine if someone invaded your home, tore you away from your family, chased you hundreds of miles away, and let you go. You don’t know where you are and can’t wait to get home. You are surrounded by hundreds of strangers, all as confused as you are. You are scared and hungry and have to fight to stay alive despite the extreme weather conditions. Some of the rest succumb to exhaustion or starvation. Some are killed by hunters or predators. It might sound like a twist from The Hunger Games, but it’s real.

It is the plight of the birds who are forced to fly for their lives in the abusive and often illegal pastime known as pigeon racing. That the victims of this cruel sport are animals and not humans should not make their suffering any less appalling.

PETA recently completed a 15-month covert investigation into some of the largest pigeon racing operations in the United States. .

In many races – which can be up to 600 miles in length – more than 60 percent of birds get lost or die along the way. Because these birds were bred in captivity and cannot fend for themselves in the wild, those who do not return home are likely to starve to death. Carrier pigeons even have a name for particularly deadly races: the â€œsmash racesâ€.

During a race in Queens, for example, only four of the 213 birds returned. Of the nearly 2,300 chicks shipped to the Phoenix area to train for the 2011 American Racing Pigeon Union Convention Race, only 827 survived until race day. Of these, only 487 birds had completed the 325-mile run by nightfall.

Pigeons are some of the most maligned urban fauna, but they are complex and fascinating birds. Both their hearing and vision are excellent and have been used to save lives in wartime and to help locate sailors lost at sea.

A study published in December showed that pigeons can learn abstract number rules – something that until recently we thought only humans and other primates could do.

They are also faithful companions and passionate parents. Both parents share the care and education of their newborns. Carrier pigeons exploit these qualities by separating the birds from their mates and babies so that they will rush home. Once the racing season is over, babies – which are no longer of any use to runners – are often killed.

A runner told PETA investigators that the “first thing you have to learn” in pigeon racing is “how to kill pigeons”. Another recommended killing these nice birds by drowning them, tearing their heads off, or squeezing their breasts so hard that they choke on them. Any bird that is not considered fast enough or that is not wanted for breeding is killed.

Like other forms of animal exploitation, pigeon racing is motivated by money. PETA has entered racing organizations where a quarter of a million dollars is wagered on a single race. Pigeon racing generates around $ 15 million per year in illegal gambling revenue and involves gambling, racketeering and tax evasion. Unsurprisingly, high stakes lead to cheating. Some runners administer performance-enhancing drugs – including steroids and morphine – to their birds. One runner even admitted he was killing falcons – federally protected birds – because they prey on his pigeons and then dispose of their bodies.

Pigeons are rock pigeons, a symbol of peace, and they deserve to be left in peace. PETA calls on Attorney General Eric Holder to investigate and prosecute illegal pigeon racing. The rest of us should avoid this cruel sport. Animals shouldn’t have to pay for someone’s bad idea of â€‹â€‹entertainment with their lives.

Paula moore is a senior writer for the PETA Foundation.