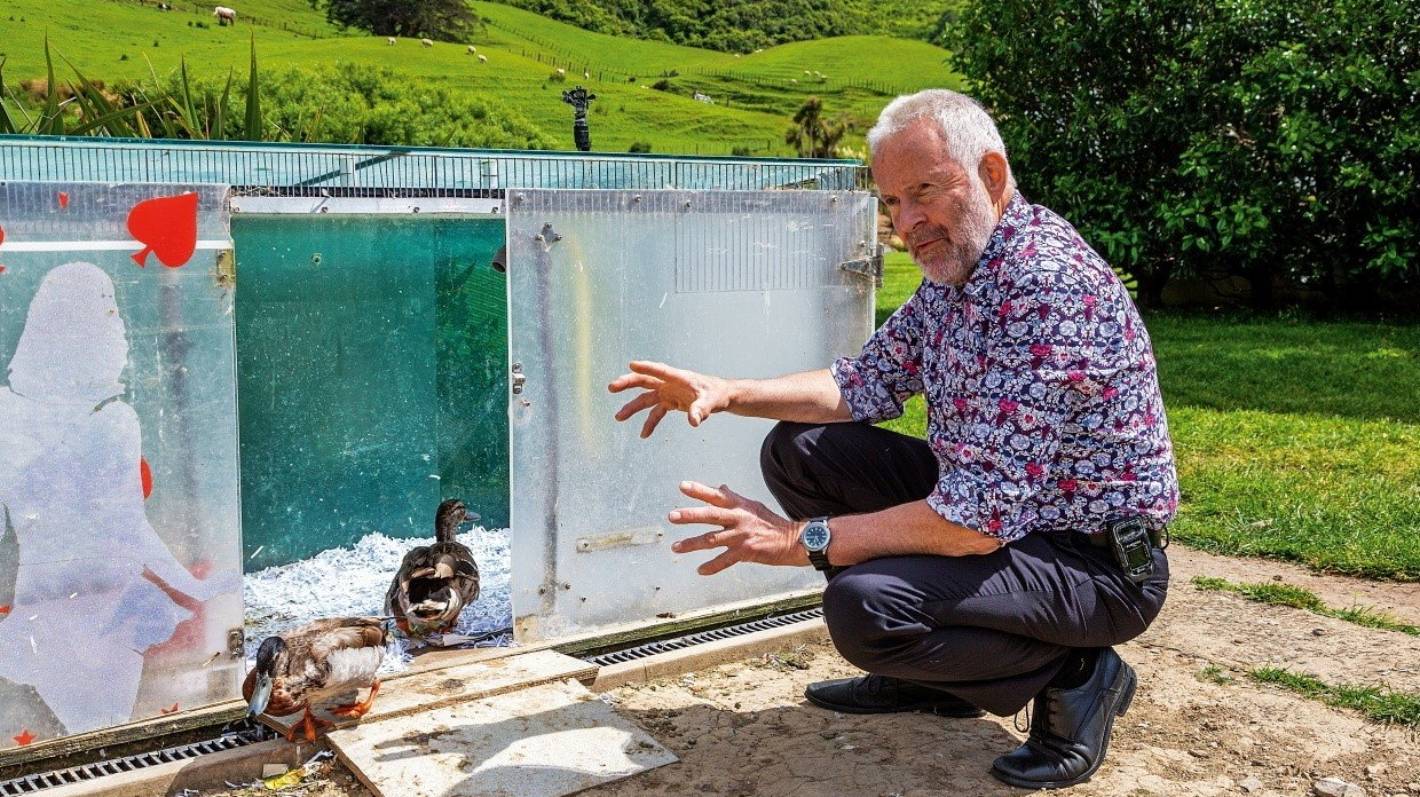 Buy a Plant, Save a Bird: The Bird Rehabilitation Trust Funded by the Sale of Native Plants

Craig Shepherd is on the phone. An injured pigeon was found in Hataitai. “Bring it here,” he said. “We’ll take care of it.”

The pigeon is just one of 1,200 birds the Wellington Bird Rehabilitation Trust in the Ohariu Valley will help this year.

The day before, a New Zealand falcon had been brought in from Levin. The falcon was captured by Wellington Zoo, but limitations at the zoo and SPCA mean the Trust is a busy place. It’s “the only functioning bird rehabilitation center this side of Whanganui,” says Shepherd.

It all started with ducks, and for many years Shepherd was known as “the duck man”. Twenty years ago, Shepherd and his partner Julie Sammut were building their home when their builder discovered an injured duckling who was taken to a bird rehabilitator.

READ MORE:
* How kauri can help us achieve our climate change goals
* 5 ways to make your garden a safe haven for native species
* Does she have every gardener’s dream job?
* Does domestic trapping stimulate native birds? Science says maybe

This was the beginning of Shepherd’s interest in bird rehabilitation and the development of “a business that consumes everything.”

Initially, the ducks were kept in a laundromat, but as their numbers increased, they were moved to a garage. Here they were taking up more and more space and the garage smelled worse and worse, so the cars moved out and it is now the Trust’s hospital.

The hospital is staffed with a paid employee 365 days a year and there is also a group of 12 to 15 volunteers who work at the time that suits them. Working with birds can be very calming and helps many who volunteer.

The Trust has a steady flow of clients. There are referrals from the SPCA, Wellington Zoo, local councils, vets and DOC, or people just find them via Google – no birds are turned away.

The ducks lost their monopoly a long time ago and with Zealandia nearby, and the increase in the native bird population in Wellington, the number of native birds helped by the Trust has skyrocketed. “We haven’t had a kiwi yet,” Shepherd said.

The Trust’s aim is to rehabilitate the birds by repairing their injuries, verifying that they can still fly, and then releasing them back into the wild. There is a dedicated flight training aviary which currently accommodates all birds, but a separate aviary for native birds is under construction. The Trust gets a lot of kererū who fly into the windows and break their collarbones.

Some birds are so damaged that they would not survive in the wild and they live at the Trust for the rest of their lives. These birds – some blind, others with beak injuries or a single wing – are housed in four aviaries. Thirty “lifers”, one-legged ducks, also roam the property. Some of them were trampled by horses as they bit the horse’s food, some were shot by duck hunters, some were run over by cars, and some had their legs bitten by eels . Most of the leg is saved “so they have at least a cane”.

A quarantine area houses birds with diseases that could be contagious, and in some cases they and others who are damaged beyond help are humanely euthanized.

All of this care has a price. In addition to surgeries, medications to fight infection and relieve pain result in a veterinary bill of $2,000 to $4,000 per month.

Birds must be fed for the six to eight weeks they are cared for, and often this food is specialized and expensive. The hospital uses a lot of electricity for lighting and heating, and there is a lot of washing, although sewage is treated and spread on the property.

This all adds up to the total cost of running the Trust – around $180,000 a year – and most of it is funded by Shepherd and Sammut, and supplemented by small grants.

Enter Warren Kerruish, who six years ago was employed by the couple as a gardener for their property.

Kerruish had been trained at the Wellington Botanic Garden where he managed the Lady Norwood Rose Garden for several years. He also teaches horticulture to apprentices at the Primary Industry Training Organization in the Lower North Island, including Botanic Garden staff.

Kerruish’s specialty is propagation and four years ago, to raise money for the Trust, he started selling some leftover plants from those he had grown to plant on the property.

Shortly after a native plant Taupō’s business closed, and the Trust purchased two moving vans full of plants to repot and sell. Sales were so successful that Feathers & Flora, the Trust’s nursery, was born and now plant sales supplement the Trust’s income.

Horticultural apprentice Jane Campbell works alongside Warren, who came to work at Feathers & Flora after hearing Warren speak at a local garden club.

As part of her apprenticeship, Campbell created a native garden using plants from the nursery and others that were brought in; these will be propagated and sold.

Volunteers occasionally help out at the crèche and at the hospital.

Most of the 5000 plants in stock are native. The focus is on plants that provide food for birds through apple trees, lavendervelvetleaf and Rosemary are also for sale. “People love flowers,” Kerruish explains.

The valley is sensitive to frost which limits what can be grown but LED propagation trays have now been introduced to extend the range of plants that can be propagated.

Word is spreading about Feathers & Flora. Councils and organizations, such as Meridian, have placed orders for hundreds of trees to be used on farms around the Ohariu Valley and Makara for riverside planting.

Another group of buyers are cyclists who appreciate the rural setting near Wellington; they often stop, watch and return later in another mode of transport to buy.

Almost half of New Zealand’s bird species are extinct and 80% of those that remain are threatened. Can we reverse the decline? (Video first published in October 2021)

It becomes difficult to meet the demand for certain things. Recently, 200 swan seedlings were bought as soon as they went on sale, “but we could have sold 2,000,” says Kerruish.

Feathers & Flora has been so successful that the roof is used to hold most of the linens for sale.

Kerruish also intends to tap into the indoor plant market in the future.

Feathers & Flora also makes and sells its own compost. Huge amounts of horse poop, duck poop, shredded paper and newspaper are mixed together with an electric paint mixer. Shepherd and Kerruish estimate they have about 60 cubic meters of compost in various stages of decomposition.

All components of the compost are locally sourced: horseback riding is popular in the Ohariu Valley, duck poo is readily available, and the hospital uses a lot of paper (shredded for compost). The local school bus driver regularly drops two bags of shredded paper at the door. Compost is sold in 40L bags with plenty of worms included.

Payment at Feathers & Flora uses the honesty system and there is an eftpos machine inside the red phone booth at the door. Customers can buy plants and at the same time sponsor a duck or a swan.

To raise more funds and publicize the Trust and the nursery, Kerruish organizes propagation and pruning courses for garden clubs and other groups, held in a large garage which has been converted into a classroom. During their lunch break, the students visit the hospital or roam the park, followed by curious ducks.

Shepherd’s goal is to earn enough money to employ someone to run Feathers & Flora full-time, and for plant sales to contribute significantly to the running costs of the trust. “When I fall off the perch, I hope it will be a charity that will continue,” he smiles.

More information on the Trust’s website: wbrt.org.nz. For the nursery go to feathersandflora.co.nz.

Loans for low-income people Personal loans for a tight budget