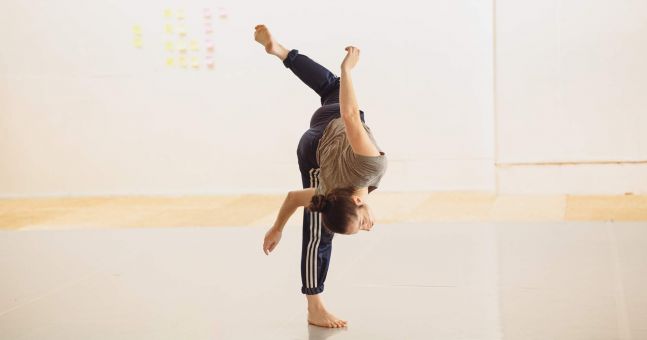 Contemporary dancer Lucia Kickham: “I have to move otherwise I can’t think straight.”

The acclaimed dancer returns to Wexford in June.

Lucia Kickham is on a well-deserved break when I call her.

The acclaimed dancer is in rehearsal all day for her upcoming show, The Here Trio with the Liz Roche Company, and I managed to catch her at lunchtime to get a glimpse into the world of contemporary dance, a scene in Ireland, which she tells me is growing.

Born in Wexford, Lucia grew up taking all sorts of dance lessons in Ireland – ballet, disco, Latin American – and had her first introduction to contemporary dance around the age of 11 or 12.

Practicing was not something she considered a professional possibility until she joined UCC’s dance society. Subsequently, she studied dance further under the guidance of Joanna Banks at the College of Dance in Dublin. After graduation, she continued her studies at a dance school in the Netherlands and has been dancing professionally ever since.

For Lucia, what drew her to contemporary dance was its range of possibilities, and what it can communicate.

She continues, “I have to move, otherwise I can’t think straight. I’ll notice if I haven’t moved for a few days.”

Dancing is also, above all, a source of joy for Lucia.

“I didn’t start dancing thinking I could become a professional,” she says. “I think that was the joy of the movement, and its potential, its possibilities.”

Lucia plans to perform The Here Trio, a piece which will see her dancing alongside two other dancers at Wexford Opera House.

As the contemporary dance scene becomes an emerging space for Irish performers, Lucia encourages budding dancers to remain open-minded throughout their training.