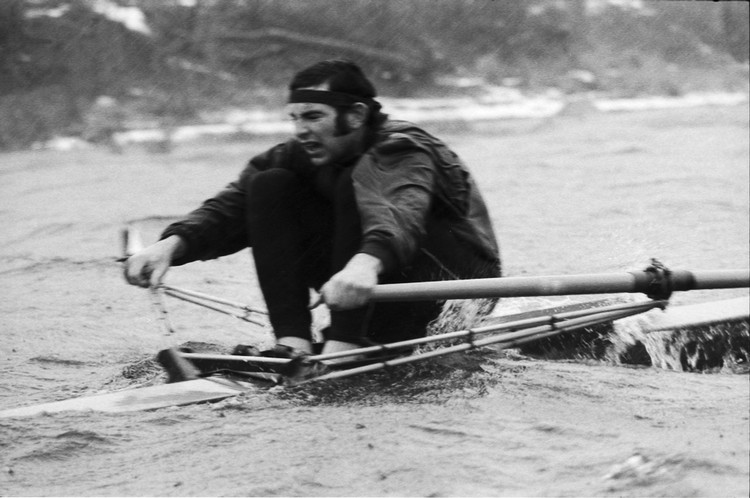 In our interview last month with Dutch Olympian and Life magazine photographer Co Rentmeester, Co recounted photographing Jim Dietz for Life magazine before the 1972 Olympic trials. Among the sessions, Rentmeester told Life that “What most excited me when I started the sculling story was just the sight of the shell itself – its lines, its grace, its speed as it cut through the water. Rowing is brutal and a sport without grace, but I believe it is one of the purest sports today, without any kind of professional influence, it requires not only ultimate physical conditioning, but great sensitivity in balance and reflexes. It’s not a social sport. It’s hard. and scary. I wanted to show the courage, the perseverance, the mental toughness, the humor and the loneliness that you must have in the sport.

Photographing Dietz, Rentmeester said: “His agony didn’t bother me at all, as I knew it was part of rowing. If he wasn’t punishing his body, it wouldn’t be a real effort. Of course, I also knew pain would make a good picture.”

Jim shares his memories of the sessions and the time below.

(Courtesy of using Co Rentmeester once)

In January 1972 I was approached by my coach Jack Sulger and asked if I would like to be the subject of a story that was going to be written about rowing for Life Magazine. I think it surprised Jack when I said emphatically NO! When he asked me why, I told him that I was still upset that I had been misquoted by a New York Times sportswriter during a race at the English Henley the previous year and that I didn’t want to no distractions in my training for the upcoming Munich Olympics.

Jack tried to convince me that this article would be great publicity for our sport. Life Magazine was one of the most popular magazines of the time and read worldwide. I still wasn’t convinced until Jack informed me that the photographer was a rower, Co Rentmeester, who had raced for the Netherlands in doubles at the 1960 Olympics. me. I thought if he was a rower he would understand what rowing really was, so I agreed to make history.

Co first showed up at NYAC in Traverse Island on Feb 5 and started following me, first on a long warm-up run around Pelham and Orchard Beach, then on a nice 12k row on the lagoon during a light snowstorm. He told me he wanted people to understand what real amateur sport is. When he talked about the beauty felt when only one couple moved well on the water, I realized that we were kindred spirits. 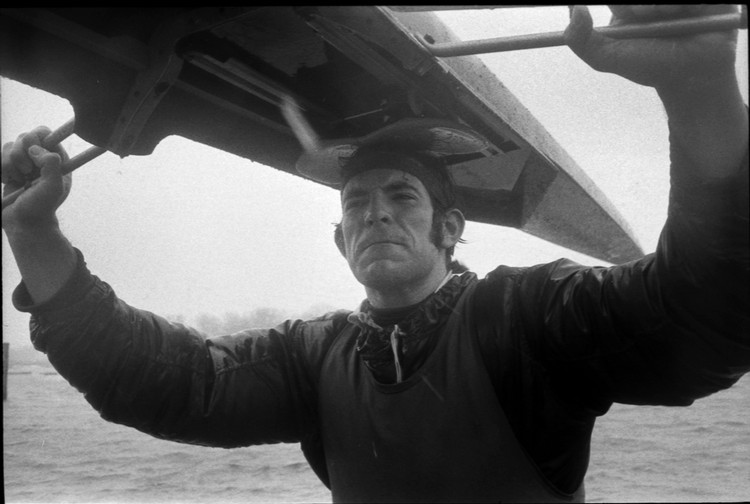 Co would continue to follow me for the next two to three weeks, to New York and then to Boston, where I was finishing up my senior year at Northeastern University. During that time together nothing was staged except the day we met after school and he asked me to go to Dorchester to run by a weeping willow he had seen the day before .

I said, “Sure, let me go to the gym and get changed for a run.” He said no, we didn’t have time; he wanted a silhouette with the tree in the background as the sun went down. “You have your Adidas, that’s all we need.” A short drive to Dorchester and this classic photo has been taken. 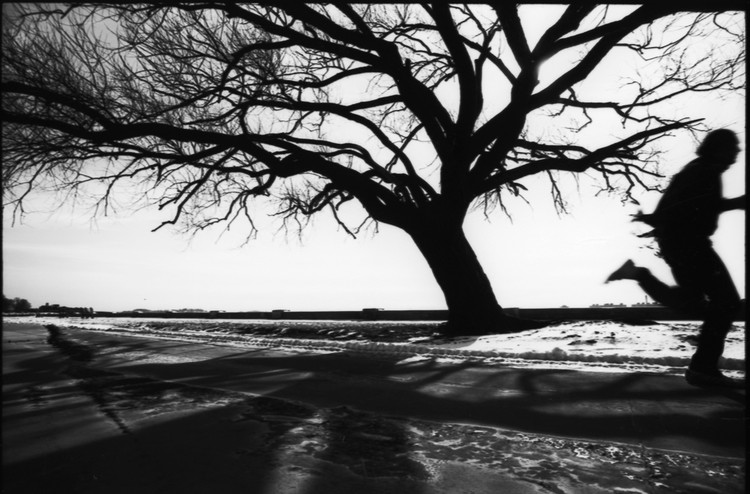 Other than that day, all Co photographed was just my daily routine of eating, sleeping, working out, and going to school. I think he really enjoyed being around the other guys on the team and comparing the workouts and training methods he experienced in his youth to what we were doing back then in the 70s. lit up and got excited just talking about rowing. 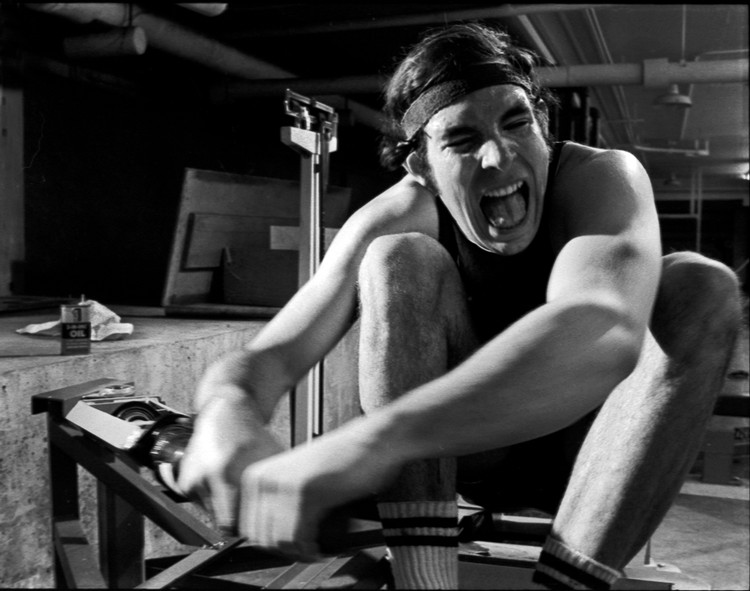 Dietz on the ergometer (all photos used once by Co Rentmeester)

There was nothing glamorous about training! It was the same when he was rowing until when we were rowing. You can see in the pictures down the stairwell of the old building where we would run up the stairs (with pigeon shit everywhere), down to the basement of the old gym with pipes on the ceiling . 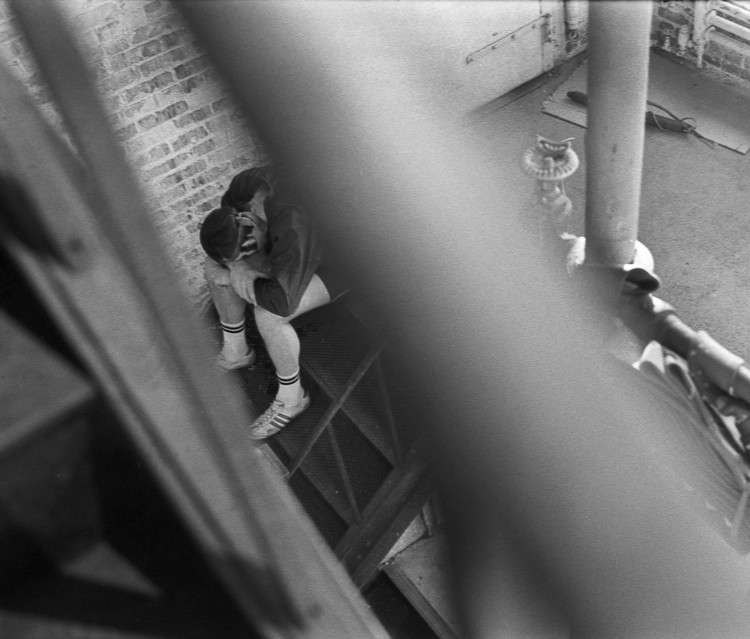 Co understood that to be successful in rowing, you had to be able to endure the hours of training, and being a single rower meant doing it alone. Hence the title of the Life Magazine article ‘A bachelor’s search for pain.’ I’m sure Co had fond memories of his time on the water, but what he wanted his readers to appreciate is how tough the sport is. I think that made him a person, like it did a lot of us.

I tried to convey to Co the beauty and peace that I found in my single. It wasn’t the The loneliness of the long-distance rower which he talked about. It was a sense of peace and satisfaction I felt after finishing a great workout or race. We now know about endorphins and how it affects your mind, but I felt it was more and tried to pass it on to her. It was an escape from your surroundings and any other issues you might have. It freed your mind.

One afternoon back in New York, the water and wind were blowing hard on the old rowing course from the 1964 Olympic trials. Any other day, I would have opted for a long run or an erg . Co had other ideas. “Let’s go, it looks great there!” I thought ‘Is he kidding!’ You’re not going to do much under these conditions. We were on the water for a short time with Co being led in the launch by Vin Ventura one of my team mates and a trainer at AC. I think it was difficult for him to shoot a film with a launch that bounced so much in the waves.

Co loved the whole experience and we all survived. These are the action shots that I really enjoyed doing. It’s an outdoor sport and you love all the conditions when you’re on the water. 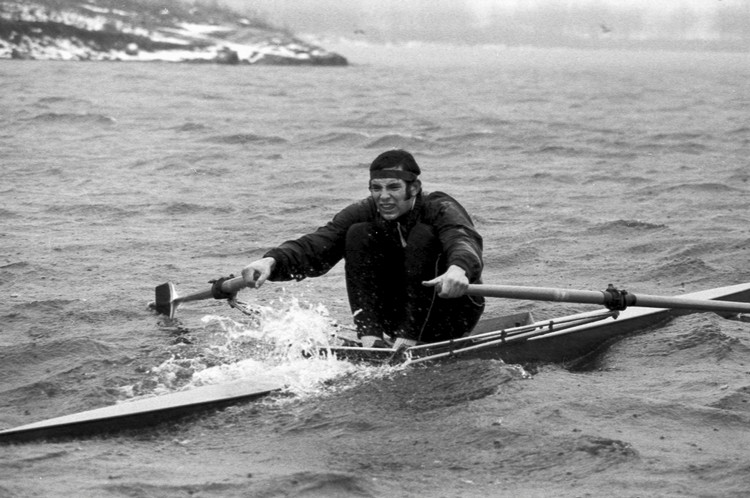 Dietz in rough water (all photos once used by Co Rentmeester)

Immediately after the Olympic trials at Lake Waramaug, Co Rentmeester and his Time Life team presented my mother with a large red folder containing many photos that Co had taken during our three weeks together. The images in the book were gorgeous, rowing through the snow and running through the hills. My mum thought they should have used more rather than all the harsh images in the magazine and told them just that. The magazine published the 8-page photo shoot on April 14, 1972, before the trials. (The pressure was on me to win!) It was more the story of Co with my photos, but I thought it made the reader realize how demanding our sport was. 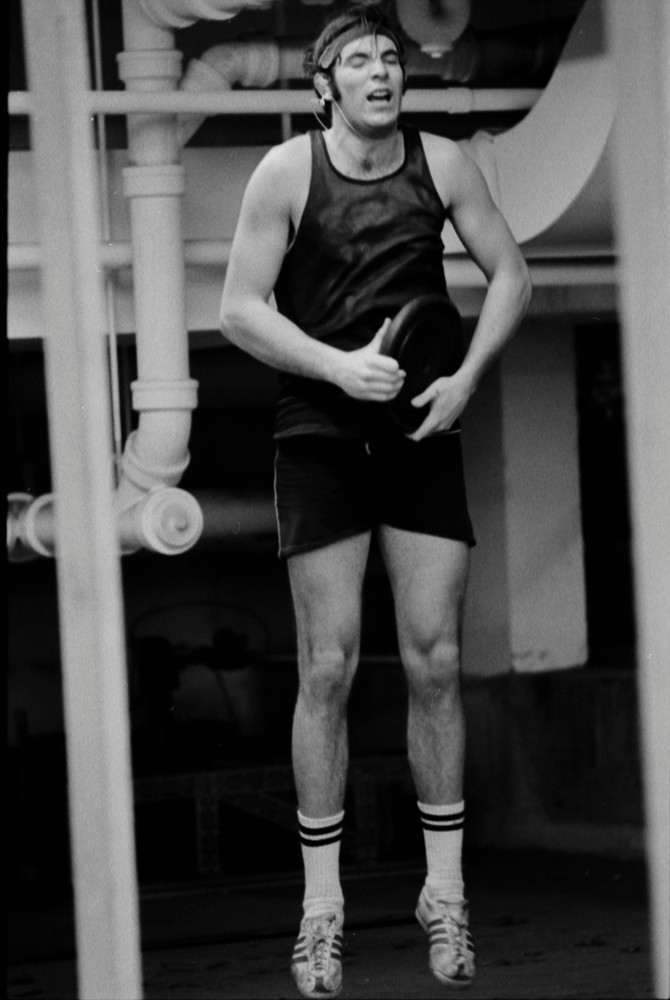 Dietz jumping with weight (all photos once used by Co Rentmeester)

As my coach Jack Sulger mentioned at the beginning, it was a great recognition for our sport and those who reach the highest levels at the Olympics. Comments in the letters to the editor section for the following month were very positive, as were those not published in the magazine that were forwarded to me. The best was the one where a Vince Lombardi quote was used.

Some 50 years later, while attending a Hall of Fame induction of a friend of mine at Northeastern University, a short man came up to me and introduced himself. He said he was my finance teacher at the time and remembered me well. He said this because only once in his career did a famous photographer from Life Magazine come to his class during an exam and ask him to take pictures. I think this photo was published, and I passed the exam! 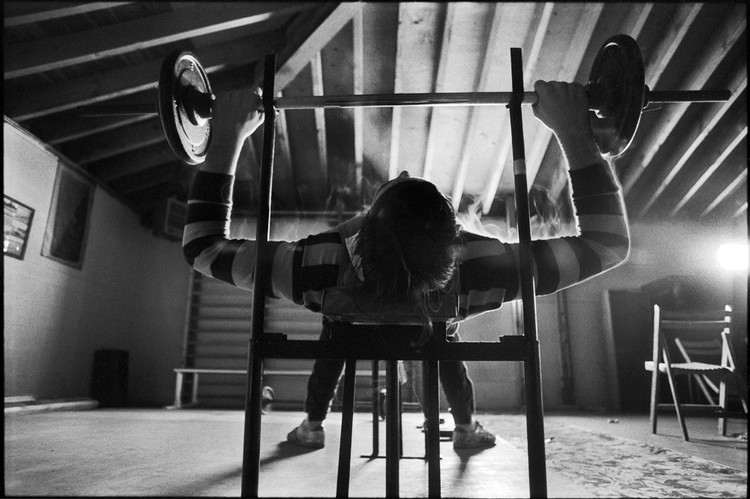 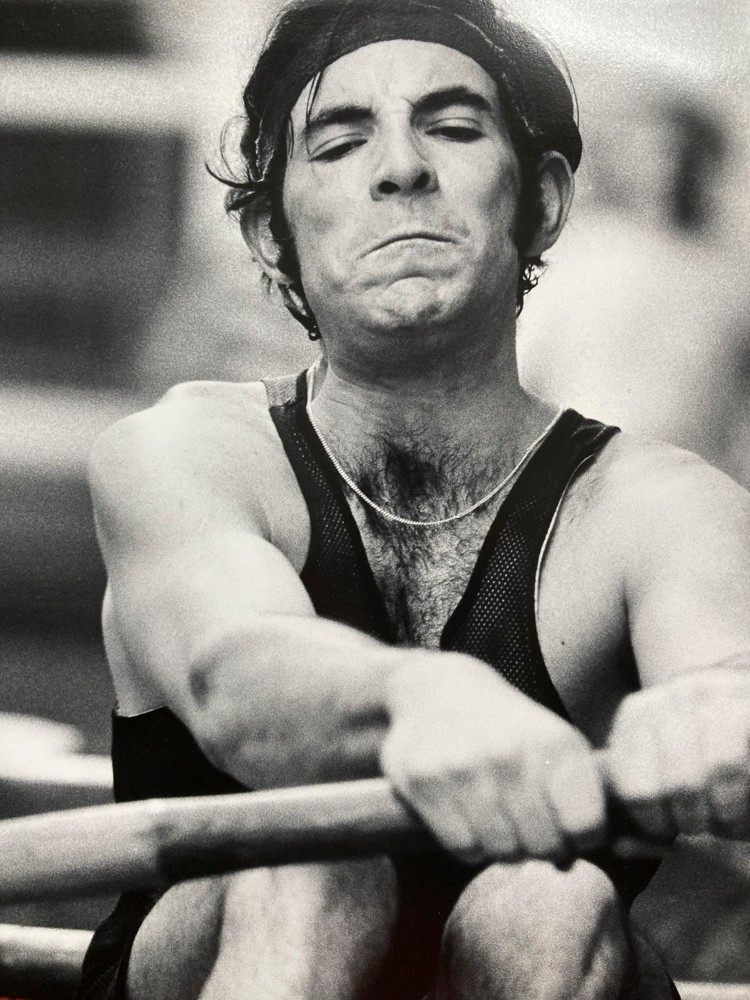 Dietz on the erg (Courtesy once used Co Rentmeester)