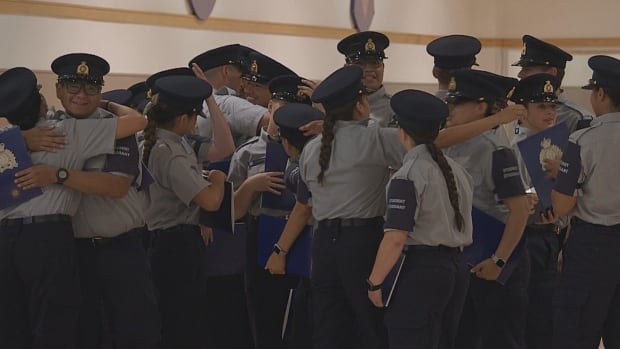 A group of Indigenous youth from across the country had the chance to experience what police work is like.

On Friday, 29 candidates graduated from the 2022 summer session of the RCMP’s Indigenous Pre-Cadet Training Program (IPTP).

This was the first three-week session for First Nations, Inuit and Métis people between the ages of 19 and 29 at the RCMP Academy in Regina, Saskatchewan since the onset of the coronavirus pandemic. COVID-19.

“It’s probably one of the best feelings I’ve ever had,” said Kila Pigeon, a participant from Kamloops, British Columbia on graduation day.

“I’m so proud of all of my castmates and how far each of them has come over the past three weeks, and how far they’ve come as individuals.”

Although his time at the RCMP Academy in Regina, also known as Depot Division, is over for the time being, it is Pigeon’s dream to one day don red serge and become a constable, a she declared.

From 1999 graduate to program coordinator

The Plains Cree woman from Muskeg Lake Cree Nation in Saskatchewan participated in the training in 1999.

“Having the opportunity to lead the program that brought me to the RCMP is an honor and a privilege,” said Greyeyes-Brant, who is the National Coordinator of the IPTP and works with the RCMP’s Indigenous Collaborative, Co -Development and Accountability Unit in Ottawa.

“I like being able to mentor Aboriginal people who are considering a career in law enforcement. »

It’s “phenomenal”, she said, to see the young contestants grow and change over the three weeks.

During the program at the RCMP Academy, participants learned about the various professional specializations within the organization as well as the training required to become a police officer. They studied policing techniques and met with Indigenous officers, according to the RCMP website.

Upon completion of the program, applicants interested in choosing a career path with the RCMP receive ongoing support and guidance, the RCMP says.

“I think having Indigenous representation in the organization is a plus,” said Greyeyes-Brant.

“We need our communities to see themselves in us, and we need to increase the number of indigenous members within the organization…At some point I will retire and I hope that one of these people will come replace me at the meeting tables. “