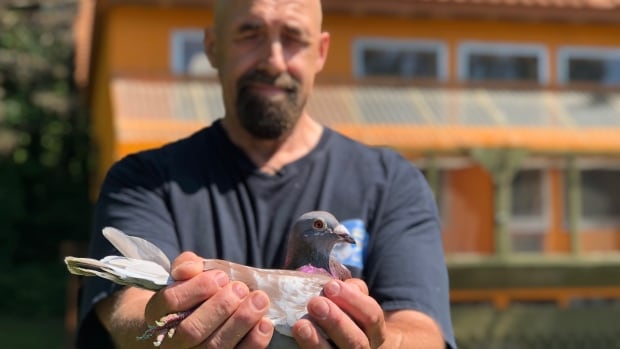 Of all the birds in the world, David Ottaway says that if he were to reincarnate he would want to come back as a pigeon.

Not just an ordinary pigeon, however.

He wants to be a muscular bird, with a bigger brain and sharper eyes than his wild cousins. A pigeon whose lineage dates back 200 years to his mother country, Belgium, the cradle of the sport that Ottaway adores.

He wants to be a carrier pigeon.

â€œThey are fed the best food, have the best place to live, fresh water and have nothing to do but fly,â€ said Ottaway.

He would know. Ottaway spent 53 years racing pigeons and keeps around 100 in two pens in his backyard in Upper LaHave, Nova Scotia.

It’s a sport Ottaway has worked hard to develop in Nova Scotia since arriving from Ontario two years ago. As a member of the Central Nova Racing Pigeon Club, he helped double the number of carrier pigeons in the province from six to 12.

Pigeon racing is all about releasing pigeons from a set point and seeing which returns fastest to its original loft.

Carrier pigeons have a natural ability to return home over long distances. The trick is to motivate them to come back quickly.

There are several ways to do this. The pigeons are trained to know that they will be fed when they return to their loft. They also want to come back quickly because after a race they have some time alone with their mate, Ottaway said.

It takes time, but the pigeons learn to return to their loft as soon as they approach home.

â€œAfter a while, I just put my hands up and said, ‘Come in. â€œAs soon as they see my hands go up, they turn around and rush over. They’re pretty smart,â€ Ottaway said.

Birds can be released up to 800 kilometers from their homes.

Before starting a race, an electronic group is placed around one leg. He registers the entry and a race computer uses the distance between the release point and the loft to calculate how many meters per minute he was flying.

The bird that has traveled the fastest wins the race.

If a pigeon still has to fly to reach his house, this is factored into the calculations so that he is not at a disadvantage.

Some people pay thousands of dollars to import carrier pigeons from Belgium, England and Germany. Ottaway knows people who spent $ 150,000 to buy a bird from a championship lot.

Last March, Armando, billed as the best long-distance carrier pigeon in Belgium, was sold to a Chinese buyer for $ 1.8 million, according to PIPA, a pigeon auction company which facilitated the sale.

â€œCarrier pigeons are very addicting and it is difficult to come out of this hobby,â€ said Ottaway.

But it is even more difficult to interest the younger generation in this sport.

To increase interest in the sport, Ottaway and other members of the Central Nova Racing Pigeon Club set up information booths at chicken shows and posted notices on Kijiji. Ottaway also brought in former runners to try and rekindle their interest.

He even donates some of his expensive imported pigeons to help people new to the sport get started.

The number of carrier pigeons in the province has doubled to around 12, and Ottaway said three more are currently building lofts. In other parts of Canada, such as Ontario, pigeon racing is more common, with hundreds of participants.

Ottaway said pigeon racing is family-friendly and parents and children can cooperate to raise the bird and then have it run for fun. There are no cash prizes for winning in Nova Scotia; only a pat on the back, or maybe a plaque, says Ottaway.

He also thought about what kind of bird he would come back to as if he couldn’t reincarnate as a carrier pigeon – a hawk.

“I like them, but they are deadly for the pigeons,” he said with a laugh.