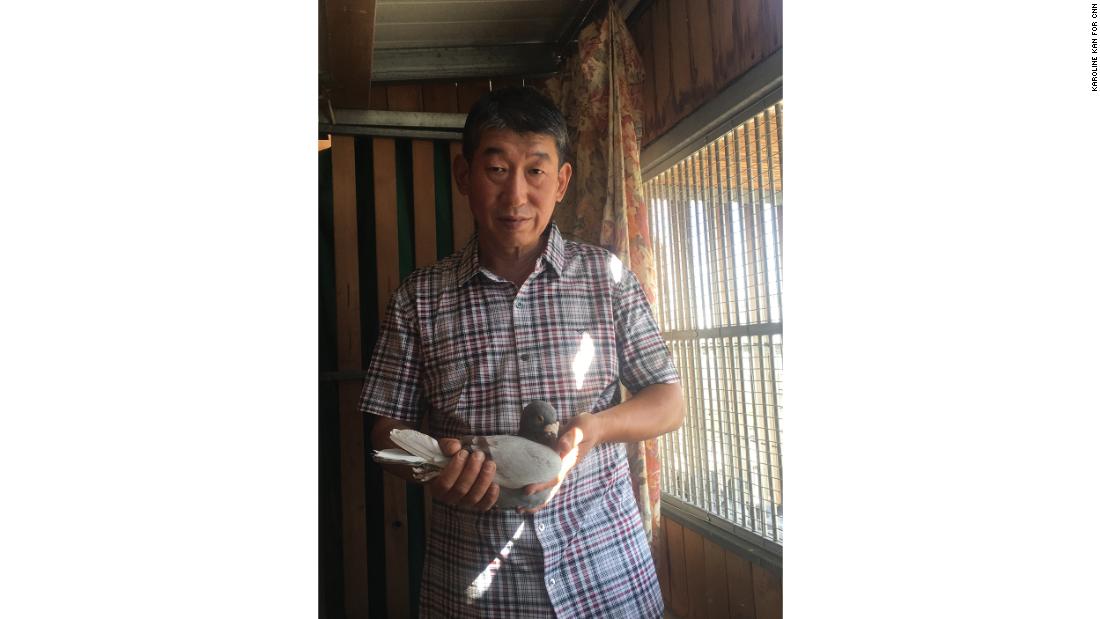 In the fascinating world of pigeon racing in China

(CNN) – Every day during the racing season, Zhang Yajun, 55, wakes up at 4 a.m. and carefully loads bamboo cages containing her 76 cherished carrier pigeons into a van. Then he drives up to 200 kilometers (124 miles) from his Beijing apartment to free them.

They train for the October and November racing season, during which millions of dollars can be won in total prizes on all races.

Zhang is just one of some 100,000 pigeon breeders living in Beijing, according to Sun Yan, Deputy Secretary General of the Beijing Changping District Carrier Pigeon Association.

â€œPigeon racing is a culture, but it is also a sport,â€ says Sun.

Zhang Yajun is one of the 100,000 pigeon breeders living in Beijing.

The money at stake was evident when a prized Belgian racing pigeon named Armando was recently sold for $ 1.4 million to a Chinese bidder.
Armando is considered the best long distance carrier pigeon “of all time”, according to PIPA, the website that organized the sale. The bird, nicknamed the Lewis Hamilton of carrier pigeons, has sparked a bidding war between two Chinese amateurs.

â€œIt’s a tiring hobby,â€ Zhang said. “But once you start it, you just get hooked.”

China, “the hottest place” for pigeons

Pigeon racing for money was first recorded in the later years of the Ming Dynasty, which lasted from 1368 to 1644. As the sport became popular, European pigeons were imported to China. .

But in the ensuing Qing era, which ended in 1912, it was banned because the nation’s leaders feared organized groups – even pigeon fanciers – would come together and plot regime change.

Pigeon racing was revived across China in the 1930s.

It was not until the Republican era of the 1930s that pigeon races have been relaunched in the British concession of Shanghai. Runners and breeders associations were founded in almost every city in the country, and the sport became a rich man’s hobby.

â€œThe Beijing pigeon races are the most professional in China,â€ says Sun. â€œAlthough Europe is the birthplace of modern pigeon racing … China has become the hottest place for pigeon racing, with the most money flowing in. With money, nothing is impossible . “

Racers send their pigeons to a club for collective training or, like Zhang, train them individually.

Zhang Yajun wakes up early, traveling many miles to train his birds.

On race days, trucks loaded with cages transport the birds hundreds of kilometers before they are released. When they get home, they stamp on an electronic board before entering a dovecote, and a message is automatically sent to the race organizer.

The names of the fastest birds are announced on the Internet, with the organizer paying the winning owners.

It only costs a few tens of yuan to enter each bird, but the wealthy owners register as many pigeons as possible to increase their chances of winning a prize. A small, budget pigeon fancier like Zhang carefully selects a few dozen pigeons.

Not a cheap sport

On a cool autumn morning, Zhang opens cages in a cornfield in Niutuo, Hebei Province, 80 km (50 miles) south of Beijing. Forty minutes later, he uses his phone connection to a rooftop camera to watch the birds return home. He’s happy with their speed.

Zhang, who was manager of a state-owned beverage factory before retiring in the early 2000s, says he spends around 100,000 yuan ($ 14,900) a year on his pigeons. This covers food, medication, race registration fees and transportation costs for training sessions, as well as gear such as his rooftop camera gear.

He does not take into account his expenses or his prize money. â€œBut overall I know I’ve lost money. Most people lose money,â€ he says.

Pigeon racer Zhang Yajun buys medicine for his birds. The costs of breeding pigeons can be high.

Zhang lives on the top floor of a former residential complex near Beijing’s Second Ring Road. He installed a skylight to give access to the roof and his 10 square meter (107 square feet) dovecote.

The birds he raises are in part descendants of foreign breeds – mainly from Belgium and Holland – and are bigger and stronger than the Chinese pigeons that people kept as pets.

Each spring, says Zhang, a hundred pigeons are born on its roof, but in the fall, only about twenty remain. The others succumbed to the disease or died of injuries sustained by hitting telegraph poles or other obstacles. Or they just got lost on the way back.

His favorite is a bird born in 2004, which he named The Glorious Tang Dynasty and which finished seventh in a 350 km (217 mile) race in Beijing in 2011. He has since retired the winner as a breeding pigeon. .

â€œThe most exciting thing about this sport is that it is full of uncertainties,â€ says Zhang. â€œYou never know what superstar you might have next year – and your best birds might get lost or killed along the way, even during a race.

A pigeon seller in Beijing. Sports are big business – a Chinese bidder recently paid $ 1.4 million for a prized runner.

But pigeon racing also has a darker side.

Zhang says that “the bird nap” – when pigeons are baited and netting during training sessions before being sold – is a common problem.

And then there is the cheating.

In April last year, two men hid their birds in milk cartons and caught a bullet train in Henan before releasing them in Shanghai, 750 km (466 miles) away. But the unusually fast speed of the birds aroused suspicion, and the men were fined and given three-year suspended prison terms for fraudulently obtaining cash prizes totaling around $ 147,000.

Beijing is becoming less and less friendly with bird lovers.

In the spring of 2017, as part of a city beautification campaign targeting two-story buildings in alleys called hutongs, many rooftop dovecotes were subsequently demolished.

The government has classified them as illegal buildings.

Breeder Zhang Jian says four large pigeon cages on his roof were demolished, although he surreptitiously guards four other cages housing around 100 pigeons. Most of his neighbors have known Zhang Jian from childhood and he says they understand his passion for birds.

Zhang Yajun says he can relax for the time being since the demolition campaign has yet to be extended to apartment complexes like the one he lives in.

â€œWhat could I do? The development of Beijing has kicked out the beautiful birds. Pigeons can only live in illegal buildings today, â€explains Zhang Yajun.

“Who knows how long all of this can last? He said, lighting a cigarette on the roof of his six-story building. â€œBeijing is too populated even for people, so who cares about the birds?â€

A Pigeon-Racing Club prepares for the start of the season