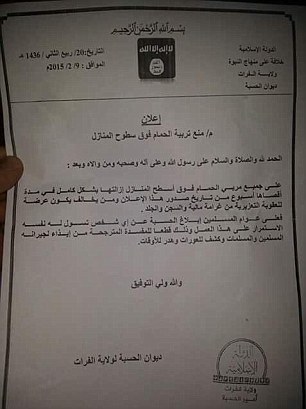 Document: ISIS issued this diktat banning the breeding of pigeons on the roofs of houses

Senior clerics fighting for the Islamic State in Syria and Iraq have issued a diktat banning the breeding of pigeons on the roofs of houses, claiming that the sight “reveals the genitals”, an idiom which would suggest activity dishonorable.

Jihadists operating in the group’s “Euphrates Province”, which stretches from Anbar in Iraq to Dier ez Zour in Syria, told pigeon breeders they had a week to stop the practice or face it. to public flogging.

The announcement is not the first time that ISIS has targeted the seemingly blasphemous practice of breeding pigeons – a popular pastime in the Middle East.

Earlier this year, it was claimed that 15 boys were arrested and at least three of them executed by ISIS militants in Diyala governorate, eastern Iraq, after fighters opposed their hobby of breeding pigeons on the grounds that it prevented them from spending their time worshiping Allah.

ISIS’s latest ban on breeding pigeons was revealed in an official document released by senior officials in the group’s self-proclaimed Euphrates Province.

Written in Arabic script on paper bearing the terror group’s spooky black and white logo, the short document begins with a warning to residents who keep pigeons on the roofs of their homes.

“Anyone who keeps pigeons above the roofs of their homes must stop doing so altogether within a week of the date of publication of this statement,” the activists say.

“Anyone who rapes her will be liable to reprimands, including a fine, imprisonment and flogging,” they add.

War on Pigeons: Latest announcement not the first time ISIS has targeted the seemingly blasphemous practice of pigeon breeding – a popular pastime in the Middle East

When rumors of an ISIS pigeon ban began circulating earlier this year, it was widely believed that they were linked to birds used to smuggle anti-ISIS messages or cigarettes.

However, the new document clarifies this misunderstanding, stating that the ban is aimed “at putting an end to the more serious criminal act of harming its Muslim and Muslim neighbors, revealing genitals and wasting time.” The phrase “revealing the genitals” is apparently idiomatic, and the ban is said to be designed to prevent pigeon keepers from looking into neighbors’ homes.

Inevitably, ISIS uses its network of terrified spies and informants to ensure that those who ignore the ban face severe penalties – demanding that residents report to the local religious police, known as of Hisbah, anyone who continues to keep pigeons on the roofs of their homes.

It is likely that those who flout the ban on an ad hoc basis will be publicly flogged and fined substantially. However, repeat offenders risk being imprisoned in one of ISIS’s notorious prison cells,

From top to bottom: ISIS’s harsh treatment of anyone involved in pigeons reportedly comes directly from senior terror group officials, such as leader Abu Bakr al-Baghdadi himself

Oddly, the latest pigeon breeding ban is not the first time activists have targeted the practice.

In January, the terrorist group rounded up 15 boys who were “wasting time” raising birds, summarily executing three of them.

Families of the surviving boys were forced to pay up to £ 1,200 each to secure their release after the group was torn from their homes in the eastern Iraqi province of Diyala, near Baghdad.

According to eyewitnesses, ISIS militants searched every house for the pigeons themselves, bagging any birds they found and taking them away to be burned.

Abu Abdullah, a farmer, told NBC News that he was able to raise the money after borrowing from his family. Others had handed over jewelry to secure the release of their sons.

Mr Abdullah revealed that his son had been severely beaten and warned not to keep any more pigeons.

Heavily armed: When rumors of an ISIS pigeon ban began circulating earlier this year, it was widely believed that they were linked to the birds being used to smuggle anti-spam messages. -EI or cigarettes.

Raising pigeons is a popular pastime in the region, but it is said to be frowned upon by extremist Islamist fighters because they think it is a distraction from worshiping Allah.

Mr. Abdullah, 52, said he was standing next to his son when ISIS militants stormed the family home and kidnapped his son.

He said: “I asked them why and they replied,” He does not follow true Islam, he must be punished for being a pigeon breeder. This habit prevents him from worshiping Allah. ‘

“I begged them again to know where they are taking her, what are they going to do to her.” They said he was going to be taken away to be tried under Islamic Sharia law.

“They pushed me, and when my son tried to stop them from pushing me, they beat him. Then they put him in the car and drove away.

An earlier version of this article referred to the phrase “revealing the genitals” in relation to pigeons. It has since been claimed that the use of the phrase is idiomatic and our article has been updated accordingly.

The wild colors and original characters of pigeon racing