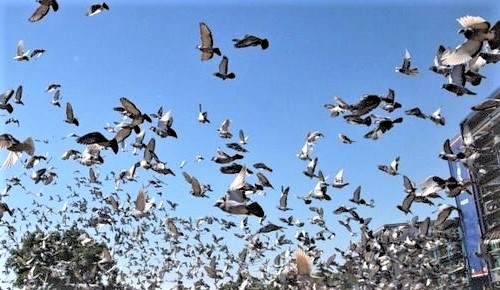 RACING pigeon fanciers on the Isle of Wight are gearing up for another season, but ironically, as we begin to emerge from containment, a bird flu crisis in Europe is one of the main causes of the program being delayed.

Avian flu has restricted bird training – essential before the race – but as the situation begins to ease, the Royal Pigeon Racing Association is now awaiting clearance from DEFRA before its next event, which is due to be held today. hui (Saturday).

Some of Geoff Watkin’s “babies” ready to race this season.

With new rules on the transport of birds and animals in Europe, these big races therefore appear to be held in the UK, with pigeons flying south from release points as far north as Lerwick in the Shetland Islands.

On the island, a new club was formed, with the majority of existing members merging from its two main clubs, to form the Vectis Flying Club.

They then joined two federations to give them the opportunity to run
much further into the UK.

Although the racing season ends in September, there has been a lot to do to prepare for its start.

One of the club members, Geoff Watkin, said: “Pigeons go through their moult, which is essential for having good, strong and healthy feathers before fanciers pair their
best birds for raising the next generation of runners.

â€œThese youngsters will then take part in shorter races towards the end of the season. ”