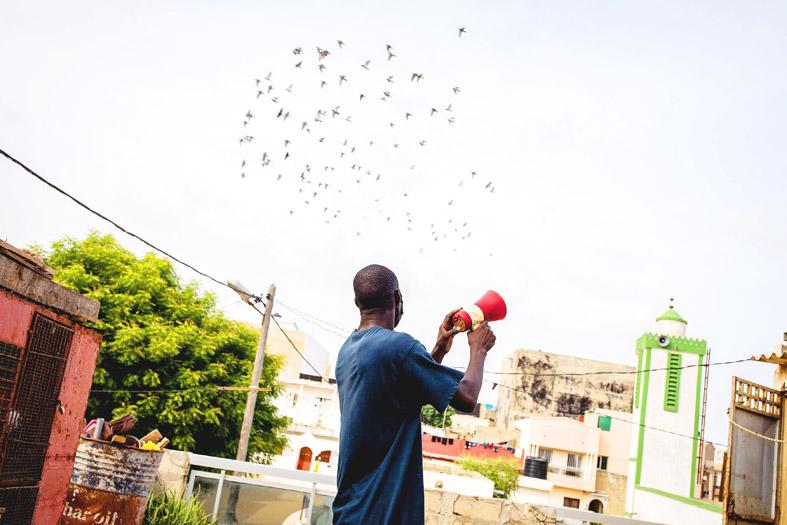 “Like a drug”: pigeon racing takes off in Senegal

Oumar Johnson stoops to enter his cramped dovecote, built on top of an apartment building in the city, and snatches his favorite pigeon from dozens of birds fluttering and cooing around him.

“This pigeon is called Super King,” he said, proudly holding the bird aloft.

The pedigree bird is Senegal’s most expensive pigeon, which Johnson bought at auction to give the country’s fledgling pigeon racing scene a competitive edge.

The 30-year-old scientist is one of a small but growing number of Senegalese who have fallen in love with the breeding and racing circuits, some to the point of obsession.

Super King costs the equivalent of around US$800, a high price in a country where the minimum wage is around US$110 per month.

“We have a kind of addiction to this animal, the carrier pigeon,” said Johnson, president of the Senegalese Pigeon Fanciers Association. “It’s another way of life.”

Long established in countries like Belgium, France and China, pigeon racing only took off in Senegal in the last decade after ornamental bird breeders stumbled upon the online sport, Johnson said.

The West African nation now has around 350 enthusiasts, many of whom ignore the protests of family and loved ones, and devote most of their free time – and significant amounts of money – to their pigeons.

Most, like Johnson, keep their birds lovingly cared for in wooden rooftop dovecotes in dense urban areas.

From his roof in the suburbs of the capital Dakar, Moustapha Gueye, a 40-year-old shopkeeper, releases dozens of pigeons from their acrid-smelling dovecote.

They rush through the air and are quickly out of sight.

“They are athletes, so they have to train,” he said, adding that pursuit takes time and intelligence.

Not only does he feed and exercise the pigeons every morning, but he also takes care of the veterinary care and develops crosses suitable for flying in hot weather.

“It’s something that can’t be explained,” Gueye said with a smile as he described his feelings when his pigeons returned after a long race.

The racing season in Senegal, with national competitions, started in November after the end of the annual rains.

In late October, dozens of mostly young men brought crates of circuits to a rooftop in suburban Dakar to sign them up for a pre-season test run – one of many that have taken place this weekend.

Volunteers recorded and tagged the birds in a lively atmosphere, joking and chatting long after midnight.

Then, conveyors drove the tagged pigeons to the town of Diourbel, about 160 km east of Dakar, to be released early the next morning.

“It’s like a drug,” said Johnson, who attended pre-race registration, explaining the appeal of the sport.

The following day, race participant Mamadou Diallo stood on his Dakar rooftop with several friends, scanning the crystal blue sky for his pigeons.

The 33-year-old electrical engineer, a self-proclaimed pigeon fanatic, was pacing in anticipation.

Suddenly a cry arose – pigeons appeared on the horizon.

Diallo, in excitement, jumped onto the roof blowing a whistle and shaking a plastic bottle to lure the pigeons into their loft.

He carefully noted their arrival times, which the race organizers would later compare with other pigeons that raced from Diourbel.

Afterwards, a more relaxed Diallo described pigeons as his passion, but joked that his wife scolded him for wasting his time.

In addition to his professional and family obligations, he worried about the welfare of his birds.

“It’s normal because… I put them in a cage,” Diallo said. “I am responsible for them.”

Senegalese pigeon racing enthusiasts are eager to introduce this sport to others.

Young people are the future of the sport, Johnson said, adding that their dedication would one day make Senegal “one of the greatest pigeon nations”.

“In Europe, you have to motivate young people to get involved,” he said. “Here, young people are flocking to it.”

Comments will be moderated. Keep comments relevant to the article. Remarks containing abusive and obscene language, personal attacks of any kind or promotion will be removed and the user banned. The final decision will be at the discretion of The Taipei Times.

The pigeon race takes off in Senegal

With beating hearts, pigeon fanciers in China spend big to satisfy their passion