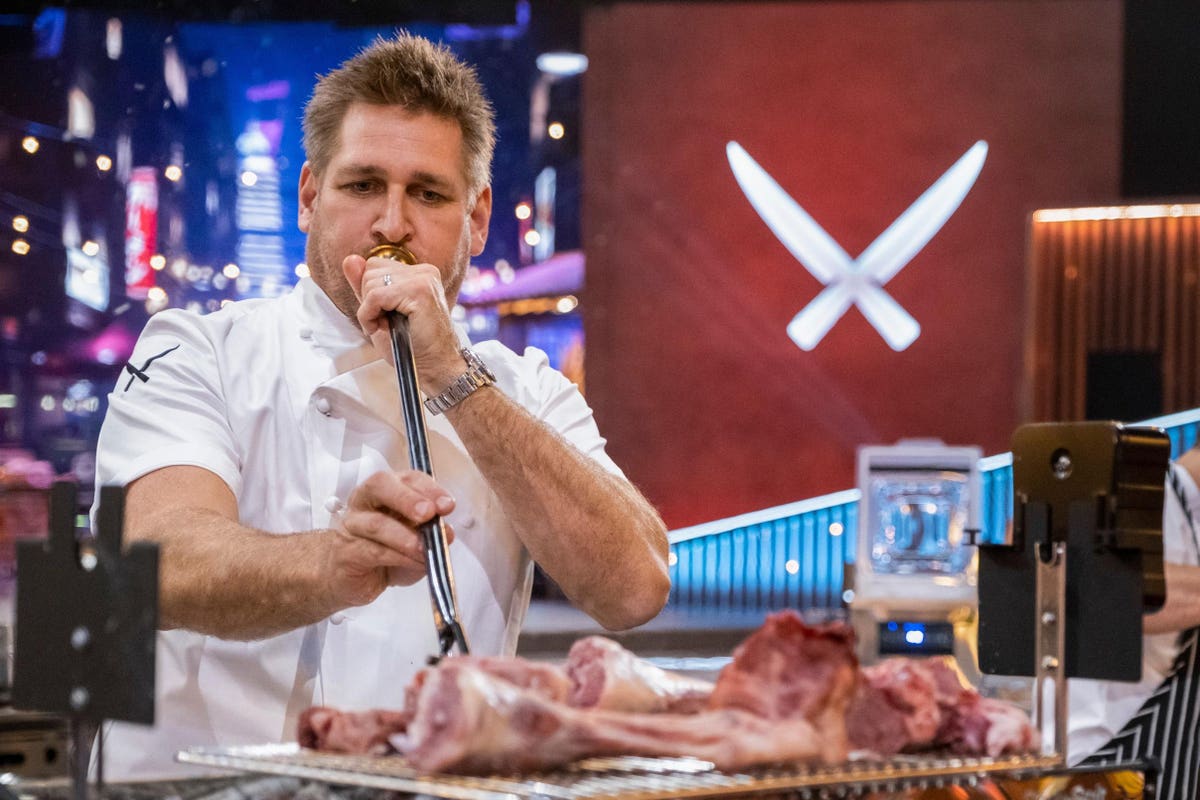 Get ready for sizzles, swoops, and surprises on Iron Chef: Quest for an Iron Legend – a delicious new Netflix series that reinvented the Food Network’s Iron Chef America, taking this iconic foodie TV battle to an even higher level. In a kitchen stadium with a grandiose and spectacular design, eight 45-minute episodes full of curiosity, creativity and the best of the best crafts – launching June 15. Michelin-starred, Los Angeles-based Curtis Stone as Iron Chef joins the masterful roster along with Iron Chefs Marcus Samuelsson, Gabriela Cámara, Dominique Crenn and Ming Tsai. They vie with seven buzz-worthy chef challengers for the ultimate legend title. Be wowed by revealing ingredients, cooking techniques and imaginative presentations. Born in Australia, Curtis galloped around the world, training in Europe under legendary chef Marco Pierre White (often called the first celebrity chef). Today, Stone’s many successes include acclaimed restaurants – Maude in Beverly Hills, Gwen Butcher Shop and Restaurant in Los Angeles, and Georgie in Dallas – as well as a full-service catering business Curtis Stone Events, frequent appearances at television, cookbooks (his sixth: good food good life) and an attractive range of Kitchen Solutions cookware. Stone’s dedication to causes through his #Commit2One initiative has raised funds and awareness for organizations such as the National Young Farmer Coalition, AdoptTogether, and Share Our Strength, which work to end hunger and poverty. child poverty in the United States through its No Kid Hungry campaign. Stone and I discussed iron boss the elation, her love of travel and the dad thing that brought her joy this year.

Quest for an Iron Legend

Laura Manské: You have taken part in numerous fairs and gastronomic challenges as an animator, judge and competitor. Has Netflix changed your world?

Peter Curtis: iron boss has always been the pinnacle of culinary competitions – the toughest, most respected within our industry. An opportunity with Netflix? Yes! Netflix has a global footprint. Knowing that the show will air in countries around the world is super exciting. Netflix brings to iron boss an existing franchise. This made the series the biggest and best possible release. It’s a real honor to be part of it. Oh my God, yes, of course!

Manské: Your smartest lesson being part of this show?

Rock: I learned a lot, both from my competitors and from my fellow Iron Chefs. That’s the beautiful thing about being a chef: you’re always an apprentice, always learning and challenging yourself. There are so many things in the culinary arts that you can’t know everything. Watching other masters was really special. It keeps you humble. I literally face some of the best chefs in the world. Yes, it’s a competition, but also a personal pleasure to be in the same kitchen as these people.

Manské: What is the thing you want viewers to remember the most you?

Rock: Chefs can get a little stubborn — [tied to] the kind of food we’re cooking in our restaurants right now. [On Iron Chef]we give you [themed] challenges, such as comfort food or street food or something totally different [theme] than what you normally cook. To be able to compete [that way] is funny. Whether it’s making a sandwich or a curry, these are not things I serve in my restaurants — [gives me an opportunity to] make a big version of them. A good leader should be able to do different things.

Manské: What is your most memorable culinary memory as a young child?

Rock: Being with my mother in her kitchen, watching her cook. She would make cookies. I was a greedy little kid, sitting there waiting for her to be done with the bowls or the beaters or the wooden spoons so I could munch on the raw dough before the cookies went into the oven. Then watch the cookies bake and grab one as soon as the [trays] came out of. I have many memories like that when I was young. I have always been obsessed with food.

Rock: I remember the first time I tried a white truffle. We didn’t have any in Australia; they are a fresh product and do not travel well, at least [years ago] They did not do it. When I moved to Europe, the scent of fresh truffles – oh my god, what is that? Since then, it has been my favorite ingredient. I made whole menus around them. I always buy them in Europe. They are very special. For me, truffles are a bit like jewelry. My wife loves jewelry, but I will do better spending money to eat a bag of white truffles than putting [a thing] around my neck. There is also a crazy romance in the way this ingredient comes to life. You must have the right dog that digs near the roots of a leafy tree. There is also something special about it.

Manské: What is the place you have traveled that you like the most?

Rock: This is almost an impossible question to answer! If I had to choose: The mountains of the Spanish region of La Rioja. When I was there it was so moody and sexy. Foggy and a bit smoky. The air had a bright scent of humidity. The food was amazing. Everything is steeped in tradition, but people have a new way of thinking. You see it in the architecture, the kitchen. Yes Rioja.

Manské: Where would you most like to travel and where have you never been?

Rock: I love Southeast Asia. I spent a lot of time there. But one place escapes me: South Korea, where my wife’s mother was born. So we have a family history there. I would like to go to South Korea.

Manské: Fanciful question. You are stuck alone on a desert island for a month. As if by magic, three foods would be there for you. What would they be?

Rock: Pork. Probably my favorite meat. You can do so many different things with a pig. I also have a sweet tooth, so chocolate. And peaches, my favorite fruit. I’ll just drink rainwater.

Manské: Another fanciful question. Who would you like to have dinner with once? It can be a living or dead person.

Rock: My grandmother, Maude. I named my first restaurant after him. She died before I became a chef and traveled the world. She was a big influence in my life, so I would like to tell her about the restaurant and what happened to me.

Manské: What’s on your near horizon for this next lap around the sun?

Rock: I’ve always wanted to keep my restaurant business relatively manageable. I didn’t have the ambition to have my name on 50 doors. I want to have excellent quality and be really involved in the restaurants that I have. I work with dedicated and talented people. I am very lucky. We are always looking to push our limits and make restaurants better and brighter. But my most important job is to be a dad. This year, I was my eldest son’s assistant coach on his basketball team. I liked it! With my restaurants and my family, I’m pretty happy. And, of course, having opportunities with Netflix is ​​super exciting.

Rock: When hotel room service food arrives lukewarm. Food should be served at the correct temperature.

Manské: What are your guiding principles?

Rock: Be authentic. Be honest. Don’t shake things you don’t necessarily want, because you might have them. Be humble. Be a good person.

This conversation has been edited and condensed for clarity.