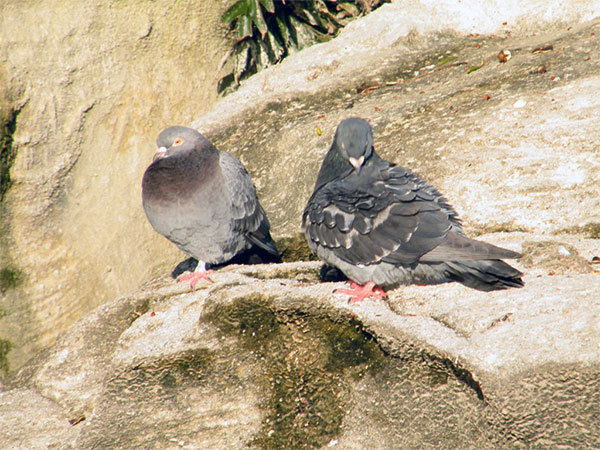 Aug 12, 2021 – Pigeons and doves, domestic and wild, are the same species. Today’s urban environment mimics their original privileged habitat, the seaside cliffs of Europe and Asia.

Martha Foley and Curt StagerPigeons are doves, skyscrapers are cliffs

Curt Stager: According to the sources, I saw that “rock pigeon” was the technical term for a wild version of pigeons in cities. And now you’re supposed to call them rock pigeons.

MF: You mean those from the cities?

CS: Yes. And the savages too.

MF: So there are some savages. That was sort of my second question.

CS: Yes. And the technical term was rock pigeon, now it’s rock pigeon, and I tried to find out why you were making the switch. And it turns out that there doesn’t seem to be a consistent difference between what a pigeon and a dove are, although when you think about it, in normal everyday speech we sort of assign values ​​to it, like you think of the dove as the symbol of love and peace, and the white dove flies away. Or there’s a pigeon and you think of them as some kind of vermin messing up statues in a park or something.

CS: Okay, maybe a nuisance, but it’s actually the same bird. So a white dove of peace is a white pigeon.

MF: And then we have mourning doves, and it’s a different bird, but visibly related. It is therefore a beautiful bird.

MF: Law. So there are wild pigeons. Where do they come from? And are they all? I mean, what’s the difference I guess?

CS: Yeah, that makes sense. When you think of pigeons living in cities with skyscrapers and then foraging in parks, it makes sense when you look at their history. They come from the Mediterranean basin. Almost the entire coast there in North Africa, Southern Europe, the Middle East, then to South Asia, and their preferred habitat is the cliffs near the ocean, or the areas of cliffs at the sea. inside high mountains, like they went up to 14,000 feet in the Himalayas and things like that.

MF: So that makes sense.

CS: So the cliffs looked like skyscrapers, big vertical stones, and then they would come down and fly in search of places to feed, usually the first seeds, some sort of grain and things like that.

MF: So do they look alike? The savages and the city pigeons?

CS: Yes, there are so many varieties of pigeons that you will see in a city. So there are whites and oranges, different shapes, but the kind of classic that you might think of as the regular pigeon is called a blue bar. And he sort of has a dark head and neck and iridescent colors around his throat.

MF: So a sort of bluish gray ensemble?

CS: Bluish gray, then two black bands or bars on the wings. This is what savages look like.

MF: So how did we get this population in the cities and all these variations? Have we done this? People?

CS: Yeah, people did, pigeons have been domesticated for at least 4,500 or 5,000 years. So in ancient Egypt they had them and used them for food. They used them as messengers.

CS: With carrier pigeons. And people raised them for their appearances. And then some of them would escape or they would be released. And they are called wild pigeons instead of wild pigeons, but they run on their own.

MF: So to come back to this really interesting thing about them – the courier pigeon, it’s the same thing, it’s just a pigeon. So how do people train them? How did they train them?

CS: Yeah, they’re pretty good. They have good rallying skills, they can use the sun and they can use the Earth’s magnetic field to navigate and you would think the savages would fly off their cliffs and walk a long distance and then find their way back every day. days. . So people take advantage of it. And one of the ways to train them is to have two separate houses for them, so one of them is where they eat and the other is where they sleep.

MF: do they have to be far from each other?

CS: So you would have them at a standard distance from each other. And then if you let your pigeon go at a certain time of day, let’s say it’s time for them to eat, they’ll go straight to where they’re eating. And then you might have a message attached to their leg.

CS: And people used them for thousands of years, the ancient Egyptians used them, Napoleon used them, they were even used in World War I to send messages before we had cell phones and things like that.

MRS: And you see them in the movies, you know, the dove coat over the buildings and people raise them for their beauty, and so on. Thank you very much Dr Curt Stager of Paul Smith’s College. I’m Martha Foley from St. Lawrence University.

Natural selections is a weekly conversation about the natural world broadcast every Thursday during Northern Lights.