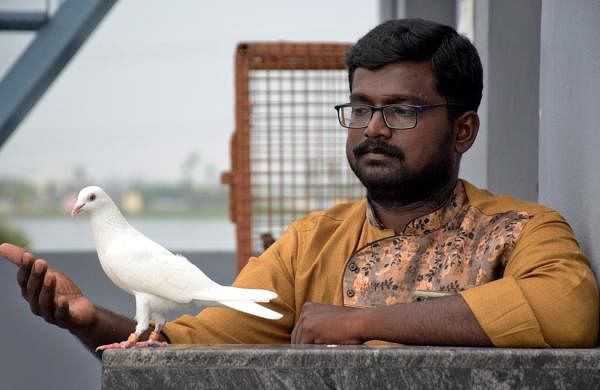 COIMBATORE: Do you remember Maari, the Tamil movie that highlights pigeon racing? Well if you don’t then this domestic pigeon will surprise you. A pigeon of the variety Thavadaal (Colombia livia domesticata), less than a year old, set a record flying 85 hours and 11 minutes in a recent seven-day race in Kempatty Settlement.

Of the 13 birds that took part, the one belonging to S Udayan obtained the first place by flying longer than the prescribed time limit. According to the competition rules, a bird would be eligible to fly the next day if it had flown more than 10 hours on the first day.

Udayan (36), a silversmith, told TNIE: â€œOn the first day my pigeon was released at 7 am and took off until 7:53 pm It did not take any water or sat down. It flew for 13 hours and 53 minutes on the first day and 13 hours on the seventh day. An arbitrator has been appointed to watch the bird.

Sharing his training techniques, Udayan said, â€œMy younger brother MS Saravanan and I breed over 100 birds in my house. We have been participating in bird races for the past two decades. We learned the art of pigeon breeding and racing from my father Sivaraj and my grandfather Masane Gowder. Every day we spend 100 euros to buy foods such as ragi, corn and green gram. “

He added: “We also provide them with nutritious foods such as almonds, dates and cashews to improve their endurance while running.”

Recounting his birds’ previous victory, he said: â€œIn 2002 one of our females flew 79 hours and 25 minutes and set a record.

When contacted, former secretary J Ramakrishnan and current secretary of the Coimbatore District Pigeon Welfare Association A Abbas said: â€œSo far the pigeons have flown. up to 82 and 83 hours. Only the pigeon belonging to Udayan flew for 85 hours and 11 minutes.

The O Dharamalingam bird flew for 83 hours 49 minutes and took second place while AKS Groups took third place with the flying bird for 76 hours and 30 minutes.