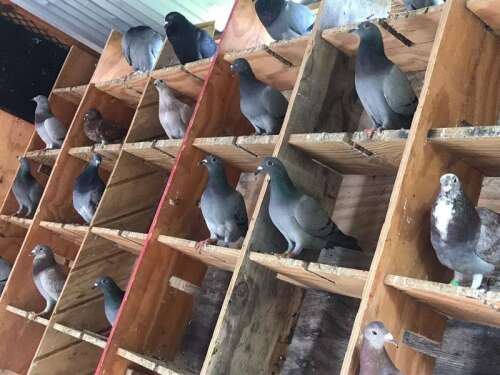 Some of the birds that make up the Mutler’s Family Loft based in Windsor Heights, St Catherine.

The carrier pigeon is a finely tuned athlete with a unique set of abilities.

These thoroughbreds of the sky not only fly fast – possessing the potential to reach speeds of up to 100 km per hour – but they must find their loft from places they have never been before.

How they do this is still one of the great enigmas of modern science.

But there are many conflicting theories about how these winged sprinters navigate the vast wilderness above, traversing it at breakneck speed.

Some researchers believe that the pigeon uses the earth’s magnetic field to orient itself, others argue that it relies on visual cues, while another school of thought is that the bird simply follows it by its nose , picking up familiar scent marks as he heads home.

There are those who believe that the carrier pigeon uses a combination of all these weapons integrated into a complex navigational nerve center.

Either way, the carrier pigeon continues to amaze and mystify.

Love for the bird, in all its races, is an endearing passion for man and racing ups the ante.

Pigeon racing is an age-old sport and many dedicated fanciers around the world keep the specially bred birds aloft in a spirit of robust competition.

In Europe, Asia, Africa and North America, pigeon racing occupies a prominent place among grand prix sports. In South Africa, for example, there is a race for a loft with prize money of US$1 million ($150 million), considered the richest bounty in the world.

Closer to home, in Jamaica and Trinidad and Tobago, the sport is kept alive by a cohort of clubs that compete in weekend races for bragging rights, trophies and relatively modest prize money. But more than anything else, it’s the racehorse’s love of the sky lanes that keeps dedicated enthusiasts hooked.

In the case of Jamaica, there are two main clubs operating in the Kingston, St Andrew and St Catherine areas which provide lift for a sport which is struggling to stay afloat in the face of rising maintenance costs.

JRPF President Moses Barnes said the high cost of maintaining the birds and low public awareness have hampered the full take-off of the true sport of kings.

The bird’s nutrition, he explained, is a major factor because specialty feeds and supplements are very expensive. Rising costs of building materials also impact the costly fit-up associated with providing suitable housing for the birds, as well as preparing for breeding and competition which adds to the bill.

With no corporate support or government waivers on imported items, the carrier pigeon has to dip deep into its pocket to cover skyrocketing costs.

“The sport is expensive because we are a not-for-profit group and rely on entry fees from our members and fundraisers to offset the expenses of racing. Mind you, there are times when I have to spend a little more to make the show go,” Barnes told the Jamaica Observer.

Barnes, born in St Thomas, who now resides in St Catherine, says there have been overtures to attract corporate interest, but the low-key nature of the sport has hampered those efforts.

“Some of the members have taken steps [to companies]but because the sport is not well known, help is dormant,” he noted.

Barnes, who operates Topflight Loft, says the inability to import “quality products”, including full-line birds, is also a mitigating factor.

“I think one of the biggest challenges we face is not having access to the quality of products that we would like to give the birds that have been designed for them because at our entry points the customs officers don’t have no knowledge of sports, hence things like vitamins will not pass,” he lamented.

Hobbyists would also like to freely import specialty bird feeds, but this has been an expensive exercise, so creative ways must be found to meet the need.

“We have a food supplier in Montego Bay, but some hobbyists buy other products and create their own mix,” Barnes said.

The JRPF boss, who runs a plumbing business, said much of the rich traditions of pigeon racing in Jamaica were dissipated with generations of breeders and fanciers before, saying that with the exception of a few, young men are not interested in flying pigeons.

Barnes admitted, however, that there may not have been enough information about the sport to attract a new generation of fans.

“Young men of this generation are different, or maybe they’re not exposed enough to the sport. Also, it’s expensive to get started, for example, it can take up to $70,000 to start the building a loft and buying birds, so young people today might laugh at us when they consider the expense,” he explained.

On the competition side, JRPF secretary Brian Martin hopes to get off to a good start in defending his 2021 title of Champion Bird and Champion Loft.

“Winning the champion pigeon and the champion loft was a great achievement for me considering that the year I won it was my first year racing racing pigeons. My aspiration for a 2022 racing season is to defend my championship in both classes,” he said.

Martin, who leaves from DreamTeam Loft, says the club and the sport could benefit from a big boost with new members and that there is a campaign underway to attract greater participation.

“I would like to see the club move forward with more members. I would really like the JRPF to be a known club. A lot of people here in Jamaica still don’t know about racing pigeons, and we need to change that.

“We have a plan in place to bring new members into our club, and this season when we are on a break (from competition) we will do everything we can to find new members for the following 2023 season. We have just appointed Andre Headlam our Public Relations Manager so the committee members will be meeting several times to plan how we can get a few members to join our club and also to secure sponsorships for the club. In addition, potential members can reach us on our Facebook page at PRGF and Instagram at Official_jamaica_racing_pigeon,” shared loan officer Martin.

Meanwhile, Tyrone Mutler of Mutler Family Loft in Windsor Heights, made a great start to the season, recently winning two prep race categories, from a draw in Santa Cruz, St Elizabeth, to the Spanish town of St Catherine, about 50 miles. .

“There’s no secret, really, to success, but there are a few key things to keep in mind and that’s always to acquire birds from pre-bred lines, to keep the birds healthy all year round. and make sure they’re happy and comfortable,” he said.

Mutler, an engineer by trade and a Triple Crown winner, says he became addicted to pigeons because they gave him “peace of mind”.

“Once you love birds and know their abilities, the passion will always be there,” he said.

“When I send my birds out for a throw (a release away from home), especially a first throw, you don’t know what to expect. But it’s a delightful feeling to see the birds coming back from a draw or a race,” added Mutler.

Kishan Chin of Ensom876 Loft, who won the category in the Santa Cruz race, reflected on the event and the performance of his hen Staf Van Reet.

“It was a tough race as there were a lot of crosswinds so the pigeons struggled, but my hen came first and she was very tired but recovered quickly. I was just happy to see she came back and it was an adrenaline rush when your birds finally came home,” said Chin, a bus driver with the Jamaica Urban Transport Company.

The new competitor echoes the sentiments of his colleagues to want to see the sport reach new heights.

“I want to see more knowledge about the sport to be more present. Sometimes when you tell people you run pigeons, they ask if the birds run,” Chin explained.

Most club members are from the best Belgian lines of Staf Van Reet and Janssen. Also, they breed and compete with, or interbreed with, the Dutch line of Jan Aarden, with varying degrees of success.

The lofts are gearing up for the Triple Crown, a series of races from the future with the release of Morant Point Lighthouse in St Thomas (October 2), and Green Island and Negril in Westmoreland (October 30 and December 4, respectively).

Winners are determined by a complex timing system taking into account time, distance and fastest time per minute.

Some of the trophies won by Tyrone Mutler from Mutler’s Family Loft.

The Benefits and Lure of Online Loan Application – CryptoMode