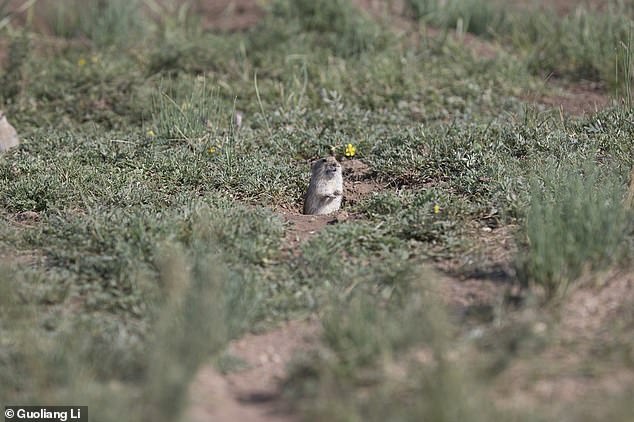 In an attempt to survive a sudden death, voles trim tall grass so they can survey the skies for predators, a new study reveals.

In Inner Mongolia, researchers tested how the behavior of voles changes when there is an increased presence of predatory birds called shrikes.

When they sense there are more shrikes around, the tiny rodents cut through the thick grass to get a better view of where exactly the birds might strike.

Voles do not eat or use dense grass; they cut it just to protect themselves – an example of what is called “ecosystem engineering”.

Brandt’s vole (pictured) cuts tall grass so it can watch the skies for flying predators, new research has found. The species lives in groups consisting mainly of close relatives, and each establishes a network of underground burrows

Ecosystem engineers are organisms that modify or control the availability of resources to themselves or to other species.

They do this by causing physical state changes in living or non-living materials.

Voles show ecosystem engineering by cutting grasses to improve their vision of the location of aerial predators.

Meanwhile, wild horses and donkeys dig wells in the arid landscape to reveal groundwater, which helps animals and plants survive.

The new study was conducted by the Institute of Zoology, Chinese Academy of Sciences, Northeast China Normal University, and the universities of Exeter and Florida.

Until now, little was known about the consequences of prey species engineering activity that alters the environment to reduce their risk of being eaten.

“When the shrikes were present, the voles significantly reduced the volume of tufted grasses,” said Dr Dirk Sanders of the Institute for Environment and Sustainability at the Penryn campus in Exeter in Cornwall.

“This has resulted in fewer visits from shrikes – who apparently recognize areas of cut grass as poor hunting grounds.

“An activity like this is costly for voles in terms of energy, so there must be high ‘selection pressure’ to do it – mowing the grass must greatly improve their chances of survival.”

For the vole, cutting the grass to get a better view of the sky is probably considered a better option than just using the grass for hiding.

Indeed, the shrike uses bunch grass as a perch when looking for prey for voles, as well as a place to accumulate their catches.

The study focused on Brandt’s vole (Lasiopodomys brandtii), which is native to shrublands and grasslands in Russia, Mongolia and northern China.

The photo shows the Achnatherum which the voles have deliberately cut down. Shrikes often perch on the branches and stems of this grass when looking for individual prey nearby

PIGEONS ARE IN THE PRESENCE OF PREDATORS

Pigeons flock in the presence of predators, according to a 2021 study.

The researchers conducted experiments with a robotic bird of prey and flocks of homing pigeon, a variety of domestic pigeon.

The species acted selflessly in the air when threatened, defiantly turning away from the dummy predator’s direction, as a collective unit.

Pigeons were previously thought to selfishly rush to the center of their flock to reduce the possibility of being shot – this is known as the “selfish flock” theory.

Read more: Birds of a Feather Really Do Flock Together

Brandt’s vole lives in groups consisting mostly of close relatives, and each group establishes a network of underground burrows; however, they feed above ground.

The problem for them is that shrikes often perch on the branches and stems of shrubs and tall grasses and look for individual prey nearby.

For the study, the team used field surveys and experiments in a steppe grassland in Inner Mongolia to assess the links between vole and bunchgrass abundance, as well as predator visits.

In the study, a predator “visit” was defined as a bird landing on the ground or on one of the plants in a plot.

In the study area, there are mainly three species of shrike: the brown shrike (L. cristatus), the long-tailed shrike (L. schach) and the great gray shrike (L. excubitor).

However, it is difficult to tell them apart in field conditions, so researchers have not singled out each species of shrike.

The researchers found that the voles actively modified the habitat by cutting down a large species of unpalatable bunchgrass (Achnatherum splendens) in the presence of shrikes.

This behavior then disappeared when these avian predators were experimentally removed by the researchers, using nets.

“The voles did not consume the grass but simply cut off the basal parts of the stems and leaves and left them on the ground, and dug burrows which led to the cutting of the roots of the bunchgrass.

“These activities cause individual grasses to grow negatively, making them less suitable as perches and larders for the predatory bird, but more suitable for voles to detect avian predators due to enhanced vision.”

According to Dr. Sanders, scientists sometimes underestimate the ability of wild animals to respond to changes in their environment.

“Our findings remind us that species show remarkable adaptations,” he said.

“It also highlights that the loss of a single species in a food web can lead to unexpected changes throughout a habitat.”

The research paper was published today in the journal Current biology.

Wild horses and donkeys are able to survive in the desert using an innate instinct that they must find water buried up to 6 feet below ground, according to a 2021 study.

This same instinctive radar for groundwater drives them to dig wells which, in turn, help other animals and plants that live in the same arid ecosystem.

That’s according to a team from the University of Technology Sydney who studied a number of dryland ecosystems in North America’s Sonoran Desert.

Read more: Horses and donkeys have an innate instinct for finding water in deserts