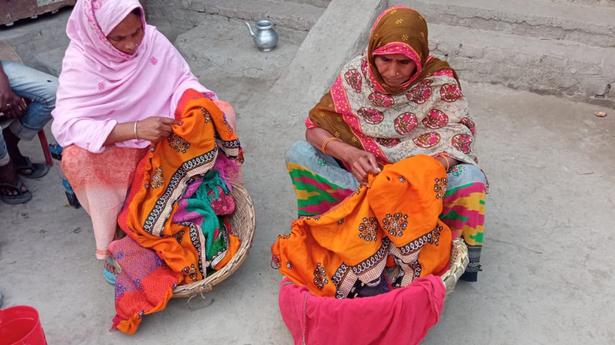 Watching Tajgada Khatun and Sharifa Khatun weave elements of their sensory experience of nature onto pieces of cotton is perplexing. They evoke lahuri (waves of a river) and kechuli (earthworm) with just a needle and cotton thread. Without any measuring tools, the precision is immaculate and the repurposed runners, throws and quilts created by them are exquisite.

Well into their fifties, Tajgada and Sharifa are just two of the immensely talented Shershabadi women from Kishanganj district in Bihar whose embroidery work, called khetahas gained a discerning clientele over the past four to five years.


The first-ever exhibit of this nearly five-century-old undocumented craft is currently on display at the National Crafts Museum in Delhi. Organized by the NCM in collaboration with the Zameen Astar Foundation and the Azad India Foundation, the barely literate artists speak Bengali and visited Delhi for the first time in their lives.

They were happy that their profession, which had been part of their community for centuries, which was used to make gifts for their daughters at the time of marriage, had finally found a window on the world. It also helps them achieve some monetary independence and gives them a degree of agency in their patriarchal existence.

In Arrawadi, her village, Tajgada says most girls learn the intricacies of kheta since childhood. Works of art created by them are “presented” in front of the future groom and his family at a wedding. They are also given as gifts during childbirth. “We didn’t know the outside world would be interested in our art,” she says.

For poor people like her, Sharifa adds, kheta was just a way to reuse saris and worn out clothes. She wanted to refine the traditional ek phool, char-phool, nau phool patterns — inspired by vegetation, clusters of flowers and lockers.

According to oral history, Sher Shah Suri, who ousted the Mughals to establish the Suri Empire in 1540, conquered lands up to the delta region of Bangladesh. The local Pashtun leader gave land near Malda district to his Afghan infantry to celebrate his victory. After Sher Shah’s death, the soldiers intermarried with the local women and were called Shershabadis. They were accepted neither by the Mughals nor by the British army. Marginalized and persecuted, they migrated west for centuries. For a long time they owned little land but have now settled in the flood plains of Bengal, Bihar and Odisha.

Ashraful Haq, one of the few graduates in the village, who coordinates with artisans and helps find work for women, says the monetization of crafts in recent years has helped them gain a voice in their conservative community. “They were able to earn between ₹3,000 and ₹4,000 per month and want to learn new patterns,” he says.

The younger generation, he says, is not interested. “In a family, most women know the trade, but not all of them may practice it. Moreover, they do not do this throughout the year. They use the time between agricultural seasons, and also make them at weddings or births in the family.

Curator Saumya Pande, head of the fashion department at the Indian Institute of Art and Design, New Delhi, says sujani and cantha were khetaThe country cousins ​​of eastern India. “The most extraordinary fact concerning kheta is that if the stitch of the embroidery is linear (the thread moves vertically) but the patterns stand out diagonally. This involves an intuitive visual calculation.

the kheta is a form of textile art that is felt through the hands and feet. Women are literally stepping on the diapers while putting the stitches on. There is no pattern placement (no central medallion, no corner patterns, no borders) but thread running from one end of the layered sarees to the other.


“The processing is linear, to create very dense patterns that run from edge to edge. Four to five layers of old, worn sarees are layered to hold them together to be embroidered,” says Ms. Pande.

Co-founder of the Zameen Astar Foundation, which works closely with women in Shershabadi, Ms. Pande has since said kheta is very laborious, the women work there after all the household chores are finished. “It’s the identity of the community that has kept the craft alive. Each piece takes several months to embroider. These quilts were basically made to be used around the home. It was only recently that ZAF had them made as bedspreads, throws and runners to promote this undocumented craft. For the first time, they attached a “price” to textiles. She says women have never seen it as something that could make them money. “Now they like to have the money in hand. Previously, they were responsible to men for the money spent. At first, the men negotiated the price, but now we talk directly with the women,” says Ms. Pande.

ZAF is also seeking GI status for kheta because embroidery is specific to a community and a region. “Furthermore, the craft has remained largely undocumented. Academic writings, lectures, presentations and museum exhibits are underway to raise awareness. We hope that with IG status it will endure longer in as a craft practiced by the younger generation and will be adopted by a wider population within the community.We hope to involve government agencies in training and developing the craft,” says Ms. Pande.